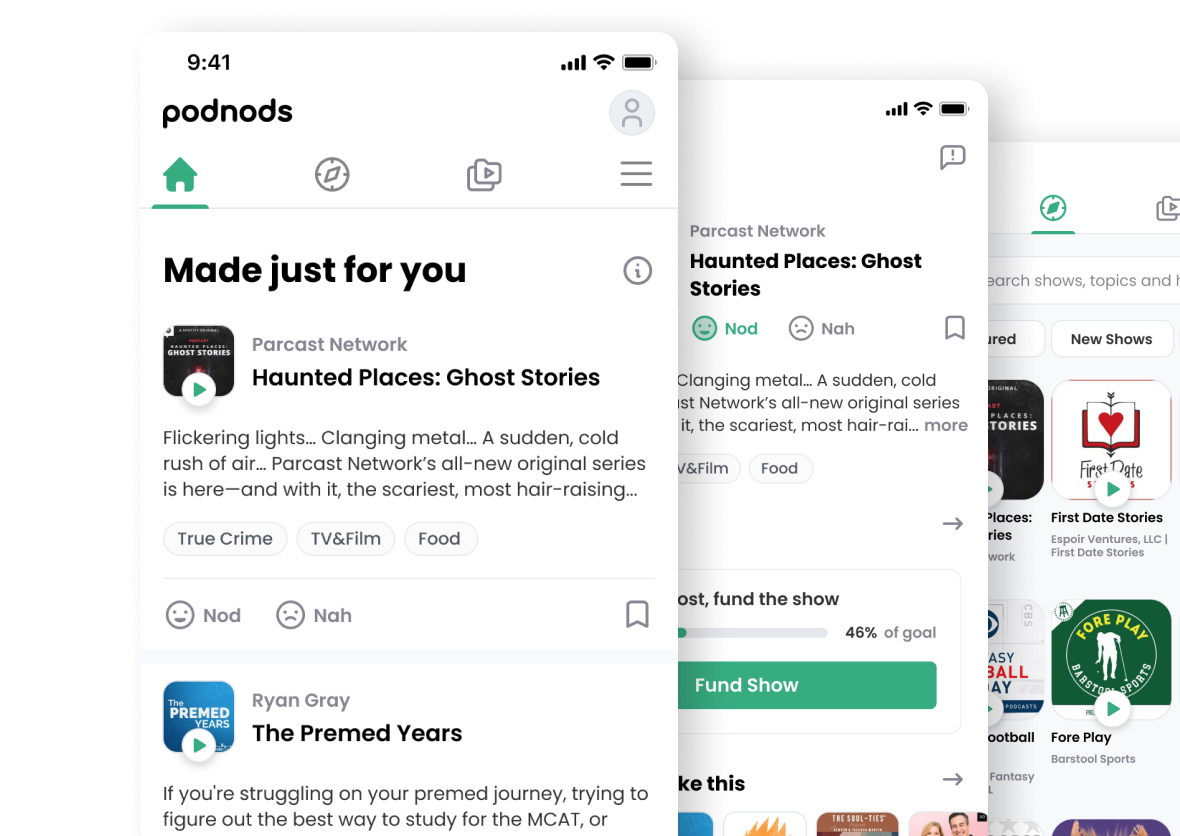 PodNods is an online platform where one can find and interact with a variety of podcasts. The Co-founder of the startup approached us with the request to boost the UX of the platform's MVP. Our team, involved in the design, implementation, and testing steps, helped to improve the overall visual representation of the brand, as well as added new payment functionality and performed high load testing before the Beta release.

Vivid podcast fans, the two Co-founders of our client company, had an idea to improve the way users search for audio content. While browsing through podcast apps, they noticed that some relevant and high-quality podcasts were rarely shown to potential listeners. The reasons hid in the search algorithms of the podcast apps, top charts that rarely included niche content, and overall insufficiency of the search results delivered.

This is how PodNods, a podcasting recommendation platform, was initiated. With its own proprietary, AI-based data augmentation, the platform allowed searching across millions of podcasting apps and websites and delivered more personalized results.

When the MVP of the platform was launched, the product had a basic design but still received a good evaluation from the target audience. The stakeholders decided to continue the platform’s development and proceed with their go-to-market strategy

To achieve higher retention and loyalty from listeners, the team decided to considerably enhance the platform’s UX. And to help podcast hosts monetize their efforts and engage them in interacting with the platform directly, it was decided to add crowdfunding functions. This required building the payments functionality and integrating PodNods with the payment gateway system.

At the MVP step, the PodNods platform had a very schematic UI, and this helped the team quickly gather user feedback. As the product moved to the new development phase, the UI required improvements to increase engagement and earn trust from the audience.

Due to the planned marketing activities the PodNods team had really limited timeframes to improve the platform’s user interface and start integrating the crowdfunding functionality. The new platform was expected to have an updated look in 2 months.

The Co-founder of the PodNods platform was looking for a new tech partner as the company they collaborated with previously didn’t provide the UI/UX design services. Besides, the project management was done on PodNods` site and was time-consuming.

With the team covering several expertise points I was much more confident in the release we had. This was very important to me as I could spare only a limited amount of time to oversee the whole project.

Mercan, one of the PodNods’ Co-founders, turned to the Wise Engineering team with her ideas. Because her requests were very clear and well-described, our team could enroll in the project very quickly. Together, we set up the business objectives we were trying to meet, pre-defined the timeframes, and agreed on the fixed budget for the project. The team included a project manager, a designer, two front-end engineers, and a full-stack developer, who mentored the overall engineering process.

For us, communication with the client is a crucial part of the effective collaboration, so we also ensured the Wise team involved in the PodNods project and Mercan, the Co-founder, could communicate directly with each other. We also set up weekly demo meetings together. The project management part was done on the Wise side, still, Mercan could be as much involved in the process as she wanted and needed to be.

The client’s request was to make a web application simple and intuitive for both user personas – listeners and podcast hosts.

The first ones needed a clear way to find episodes of new shows according to their interests and interact with them, create lists of podcasts to watch later and make donations for the shows they want to support. As for the podcast hosts, they needed the functionality to claim the content they own and define the budget they want to accumulate via crowdfunding for each podcast episode or series.

The Wise team started the work with the detailed user experience analysis identifying the possible bottlenecks and confusing UI.

Since there was new functionality introduced, user actions needed detailed mapping, so after the analysis, we proceeded with wireframing all possible user flows and developed a new graphic concept for the platform.

The key element from the user experience perspective was to build user’s trust in the platform's credibility. The designer from the Wise side created graphics, icons, typography, block stylization, and illustrations for the new PodNods look.

Mercan participated actively in creating the changes for the layouts. She says that the ability to communicate with the designer even when the implementation step had started helped to introduce new ideas faster, instantly react to the focus group feedback, and create a truly user-friendly UI. 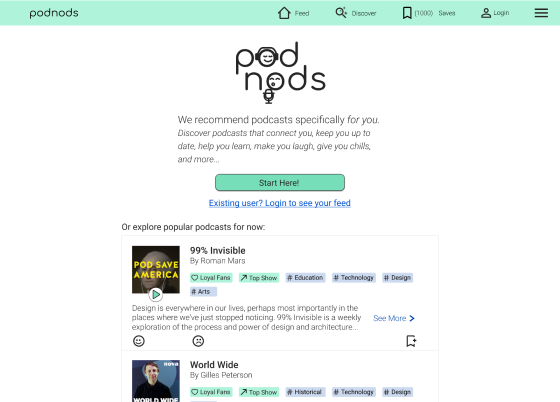 Podcast feed at the MVP step 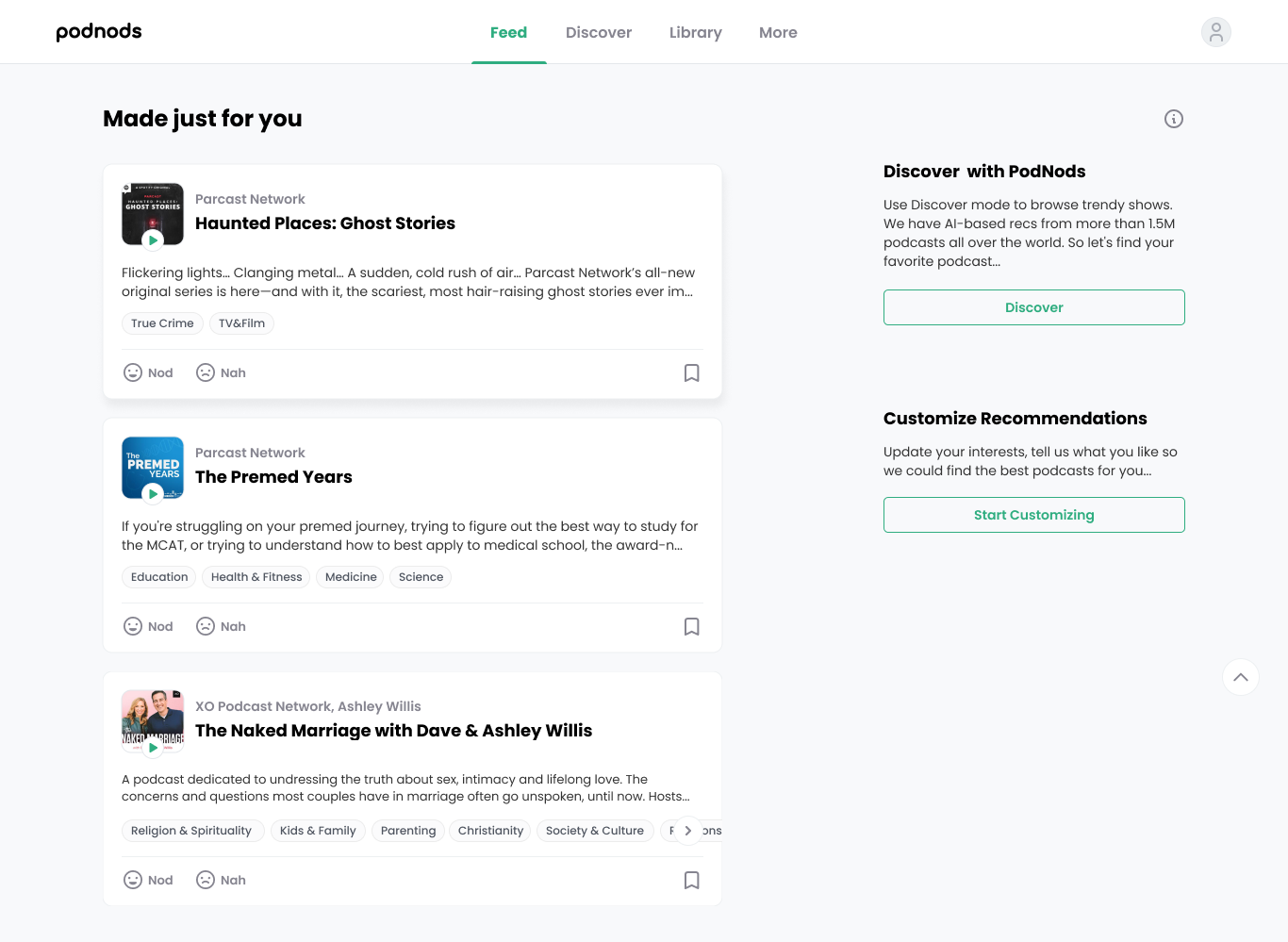 When the design part was ready, the project manager on the Wise side helped to create the implementation roadmap for all the improvements. In close collaboration with the Сo-founder, we defined which product feature took the lead on the development list.

For each new component and feature, the Wise Engineering team was selecting the simplest implementation solutions to speed up the release time. The Wise team moved in small cycles that helped to check their viability for users and react to the feedback. Each functionality introduced was tested by the Wise team. The Wise team also performed the Component testing for the implemented feature.

With weekly reports, demos, agendas, and updates via Slack, Mercan, the Co-founder, always stayed up-to-date on the development progress. She could coordinate the process without needing to dive deeply into the project management routine. 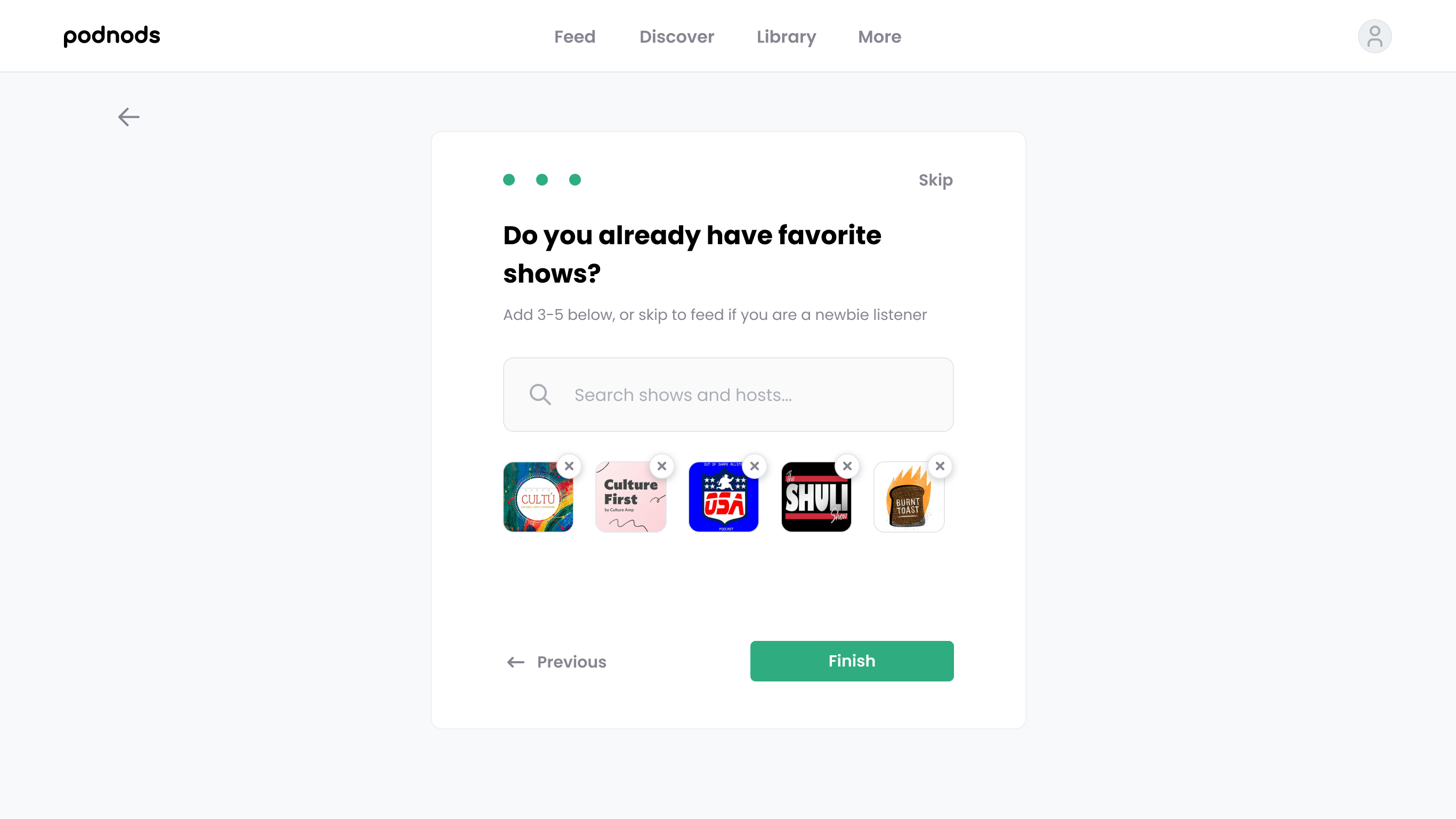 Integration with Stripe was a very important element of the new project development phase. Our team helped to set up Stripe and Stripe Connect integrations, both on the front-end and back-end.

The work our team had delivered made it possible for the PodNods team to proceed with introducing the crowdfunding capabilities to the PodNods' platform. 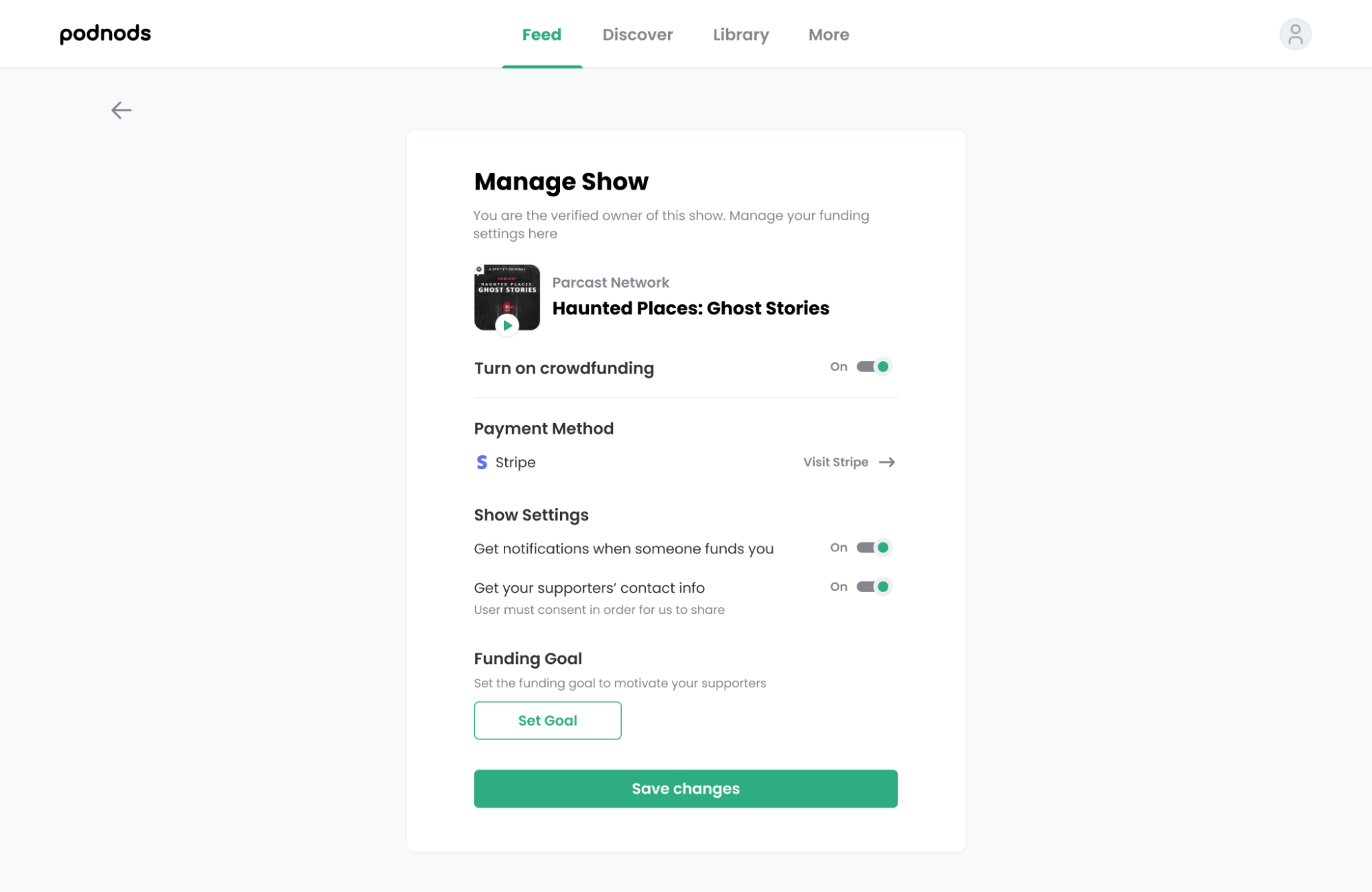 Ownership is one of the key values at Wise Engineering. This means, whenever undertaking any of the initiatives, be it our in-house project or the one we've been hired for, our team takes full responsibility for its success.

When the PodNods team was preparing for the Beta release, the project mentor suggested performing the high load testing to make sure that the platform is ready for the increased number of users.

After the testing, the PodNods team received the system performance reports and data that allowed them to understand at what level their platform will require additional infrastructure scaling.

We improved our infrastructure dramatically. It became more reliable and scalable with no downtime. Now we deploy code multiple times a day!

Wise as a tech partner accelerated the release time and helped to meet the strict deadlines.
Report on the high-load helped the team understand at what point the infrastructure optimization will be a must.
The platform’s front-end performance was improved, and Wise ensured cross-browser and cross-device compatibility.
The Wise team assembled a scalable tech stack for the platform that will help to easily evolve the product further.

The platform received an appealing visual identity and was ready to move into the new product development phase.
The new design helped to create trustworthy branding and increased the platform’s credibility for crowdfunding.
Each user persona received the necessary feature set to be able to interact with the platform based on their interest.
Involved in the engineering process, the Co-founders could coordinate the development and quickly introduce new ideas.
The Wise team helped us get products to market faster with the infrastructure to test our hypotheses, iterate, and scale.

From our experience working with multiple startups on MVP development, we know that every story of launching a new product is unique, and there is always something valuable to learn from each. The PodNods team took a great approach to product development, and you can learn some handy tips that helped the team succeed with their idea.

Build products with an impact

Build products with an impact

When conceptualizing any product, address the global problem it will solve. This will help to build impactful products that get traction.

No need to wait until the release to get opinions on the product you’re building. Consult industry experts, assemble a small focus group, and test everything.

Two people can launch a startup

Two people can launch a startup

With numerous vendors you can outsource the design creation and development to, you no longer need an office and in-house team to start fulfilling your ambitions.

Clear requirements do the trick

Clear requirements do the trick

The more clearly you envision the product, the faster the outsourcing team can start its implementation. With direct contact with every team member, you speed up every step.

From our experience working with multiple startups on MVP development, we know that every story of launching a new product is unique, and there is always something valuable to learn from each. The PodNods team took a great approach to product development, and you can learn some handy tips that helped the team succeed with their idea.

Have a complex tech task
in mind?